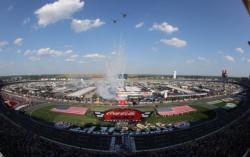 Speedway Motorsports was named the recipient of the 2019 President’s Veterans Recognition Award from Coca-Cola. CMS/HHP

In honor of its unwavering commitment to saluting the United States Armed Forces, Speedway Motorsports was named the recipient of the 2019 President's Veterans Recognition Award from Coca-Cola.

"It is a tremendous honor to receive the President's Veterans Recognition Award from such an organization as well-respected as Coca-Cola," Smith said. "Our company prides itself on offering unmatched experiences for veterans, active-duty military guests and their families. Our initiatives are simply an effort to say 'thank you' to our heroes in the U.S. Armed Forces. Because of what they do, we get to do what we do. This award is a credit to the never-ending support for our military from the Speedway Motorsports family, and we are humbled by this recognition."

Among Speedway Motorsports' military support programs, the newly created Welcome Home Patriots initiative is designed to improve the lives of servicemen and servicewomen after active duty. The first-of-its-kind program salutes, engages and enables members of the U.S. Armed Forces as they transition to civilian life. Additionally, Speedway Motorsports offers military discounts at all eight venues and promotes discounted ticket purchases at Charlotte Motor Speedway through the speedway's unique Patriot Partners program - which has distributed more than 100,000 NASCAR event tickets to military bases and the USO since the program's inception in 2010.

"Speedway Motorsports is a leader in serving those who serve. They do incredible work to support service members and veterans of our U.S. Armed Forces," said Jim Dinkins, president, Coca-Cola North America. "We have a long history of partnering together on events like the Coca-Cola 600, and it's an honor to celebrate their accomplishments with this award."

Texas Motor Speedway annually hosts a First Responder and Military Appreciation Night for the July 4 holiday weekend, while Kentucky Speedway has donated significant funding to the USO as well as partnered with the Kentucky National Guard and branches of the U.S. Armed Forces to salute military members on race weekends.

Among other initiatives, Bristol Motor Speedway provided lunch and pace car rides with NASCAR driver Chase Elliott to members of the Tennessee Army National Guard as part of its Nashville Media Day in 2019 and supported the Tennessee Division of the Navy in their successful bid to host Navy Week in the Tri-Cities in 2020.

Collectively, the speedways also express exemplary support of the U.S. Armed Forces through military flyovers, static displays and band performances along with employment of veterans and National Guard members on NASCAR race weekends.

Speedway Motorsports is the first sports entertainment company to receive the President's Veterans Recognition Award in the 20 years it has been presented.